In my career, I’ve always sketched. I believe in the organic process of an idea going from the brain, to the pen in your hand, and then to the paper. Fleshing out a concept in this way, is a necessary series of steps. It was more customary in the pre-computer era. Now there is a tendency among some in the younger generation to go directly to the graphic programs to “visualize” an idea. Drawing is a skill that must be encouraged and cultivated. In design schools there is such an emphasis on the need to acquire skills in the various software programs, that the primitive and organic process of visualizing through drawing is neglected. Students don’t see it as a path to becoming a great designer. The truth is that a few minutes drawing out an idea can save hours on the computer, later.

Going straight to the computer is also a way of limiting what the final design may look like. So often when a student begins to visualize on the computer, they move elements around continuously, in a liquid fashion. There is never a decision about a structure or an arrangement of forms. When things finally get to a certain place, they just stop. 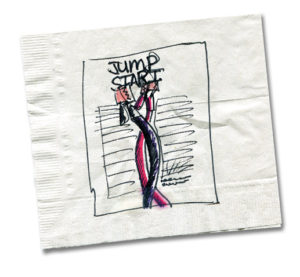 I’ve never been a “pencil” sketcher. For me, it has always been the permanence of ink on paper that appeals. To me, sketching with a pencil, and periodically erasing, then sketching, then erasing, defeats the whole purpose. I don’t care very much what sketch looks like after I draw it. I do care very much what it means. If it conveys the idea, then it is a good sketch. I will admit that when I am going to present this very preliminary type of thumbnail to a client, I tend to draw it over a couple of times so it is presentable. But still, no pencil and eraser.

Sketching lets you get all of the obvious, trite, and expected solutions out of the way. You sit down and draw out whatever comes to mind. You go down the laundry list of items and things that relate to your product or service. If you’re selling the idea of a condo on the beach, you might draw a beach, beach ball, sunglasses, bikini-woman sunbathing, etc. You draw those things, and many more. These are the expected and obvious things. Sketching like this helps get the mind moving. But then, you start to free-associate and start to bring in things that aren’t obvious. You make connections. You draw a picture of an executive in a suit walking down a city street with a surfboard under his arm. The idea of a real “concept” has begun.